My God, I am in such a pissy mood. I don’t want to be. What the hell is my problem? This is getting stupid. Can’t I even have one evening where I don’t get all depressed at some point or another?

It’s just little things, too. I finally decide to think about using the video capture card, and now I have no idea where my camcorder source tapes went. Something I’d been planning for Aaron’s birthday is threatening to go awry. I had three bratwursts for dinner because nothing sounded good. I want to clean my desk and have no idea how or where to start. That sort of thing. Little shit is getting me down, and it’s stupid. Then I get pissed at myself for letting a bunch of little shit get me down, and the cycle continues. Gyarr.

In the interests of shaking the funk, I will now take questions from my good readership. Sheryl asks:

how did you get into geneology? how much would you say you spend on it?

Well, Sheryl, that’s a good question, and Grandpa is a very good place for you to start.

As for me, I got into genealogy through the Mormon church. (‘Here we go,’ I can hear you groan…) See, the Mormon church has this idea that, in order to get to the absolute highest level of heaven, you have to be a Mormon. (Imagine that.) So, if your ancestors didn’t have the opportunity to be baptised during their lifetime, you baptise them posthumously, acting as proxy—that is, you go to the temple and do Baptism For The Dead.

Yes, I have done this. Yes, I now find it strange.

So, your goal as a good Mormon is to get the rest of your Eternal Family baptised and sealed to you For Time And All Eternity. Hence, genealogy.

When I was in Junior High, Mom got into genealogy, and took me with her to the genealogy workshops and the Western Reserve library and the Cleveland Library and various LDS genealogy centers, and we dug through spools of microfilm and sheets of microfiche looking at census records. That was mainly all we did, and the only cost was our time and whatever donation we opted to give to the place where we were researching.

See, Mom had pretty good info from her father (my Grandpa Cook) about the family—his parents, and their parents. He was a stickler for saving those In Memoriam cards and obituaries and programs and such, so he had a decent amount of info… we just had to find good old Grandpa Sharits in the 1880 Census.

I didn’t get into genealogy on my own until years after Mom had started to slack. In college, with the advent of the internet, I began doing some research on my own. I found sites like Ancestry.com, Genealogy.com, FamilySearch.org (an LDS search site), RootsWeb, and others. Years ago, when I first started using these sites, the vast majority of them were completely free; now, some of them have fees associated with searching certain databases. I actually do subscribe to the Census Records on Ancestry.com, and I pay $12.95 a month for that access. (So, if any of my friends ever need any census records looked up, just ask me!)

Another site I found that was infinitely helpful was United States Vital Records Information. This is a listing of every state in the U.S., every county in those states, and every place to write for birth and death records. These records usually only cost maybe five or eight bucks, including postage, which means I’ve spent about… *counting vital records in my binder* …a smidge over $100 on vital records in the past several years combined.

Luckily, once you reach a certain point in your lineage, you’re bound to find someone with information that links up with yours. Unluckily, you still have to research it yourself, and can’t necessarily take one person’s word for it. I’ve hit snags like this with my Sharits research, finding different people with different opinions of who fathered John Sharrits back in the 1700’s.

For another flip of the lucky/unlucky coin, you have the fact that there is quite a bit on genealogical info online: census records, cemetery plotting, genealogy communities with biographical information, deeds and titles, things like that. The disappointing side of this is twofold: 1.) how do you know those records are accurate, especially if they were transcribed by a single person? 2.) at some point, the online info runs out and you have to either go to your couthouse of origin or do some mail-order genealogy.

So… how to start? For you, Sheryl, depending on how far back Grandpa can get you, I’d say 1.) order some birth and death certificates. Death certificates tell great stories, but since the person they’re about is dead, they’re not always completely accurate. Birth records are more accurate, but much more boring, IMO. 2.) If Grandpa gets you back to 1920 or further, look at the U.S. Census. (I’ll hook you up with my Ancestry.com info if you want.) The U.S. Census is released 70-some-odd years after the fact, to protect the privacy of the people named therein. Meaning, most everybody named in the 1920 Census is dead (but not my Grandpa Cook!)

Those are my two main sources for the vast majority of my genealogical research. There are other possibilities, like church baptismal records, marriage certificates, land deeds, social security applications, obituaries, etc., but I find that most of the info I need is in either vital records or census records. It’s easiest to find there, anyway.

*whew* I just jabbered my depression away. How about that?

If you want any help with the Lineage Of Sheryl Stoller, just holla. Genealogy is fun… it’s like a logic problem that’s never over, or a mystery that’s never completely solved, or a book that you’ll never finish writing. 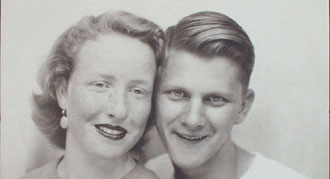 Well, I’ve successfully managed to adjust, upload, and order copies of 27 family photos. And, for you Photoshop geeks out there, I’ve only just now discovered the magic and majesty of the Healing Brush. To think I was using exclusively the cloning tool for so long! My life has just become a lot easier.

Anyway, I will soon have actual 4×6 prints of my great-great grandparents on down, also including some rare photos of Yours Truly in the late 80’s. Middle School was a scary time to witness. Maybe I’ll post the pics sometime when I’m feeling particularly sadistic.

Oh my goodness. My little cousin Michael is an adult now, and has been for some time. He’ll be 20 in October. Wow.

I never had a real sibling growing up, so back then, Michael was the closest thing I had to a brother. He’s eight years younger than me, and has some psychological/behavioral issues—so, although I always loved and respected him, it wasn’t until he was well into his teens that I felt I could connect with him in a “grown-up” way.

Of course, after Mom married my first stepdad, I had two stepsisters and two stepbrothers, but only felt even remotely close to my one stepsister, Dawn, who was two years older than me. And once I was in college, Mom married Gary, at which point I got Philip as a stepbrother. He’s two years younger than Michael, but more socially well-adjusted. (Well, maybe I should just say he’s not autistic like Michael and leave it at that.)

Anyway, I didn’t really have the same kind of relationship with any of my step-siblings like I did with Michael, because I never really lived with them. I only lived with Michael until he was about four, but after Mom married Tom and we moved out, we still came over to visit every Sunday after church, and sometimes during the week. Then, when Mom divorced Tom, we moved back into the same apartment complex and would see or talk to the rest of the family multiple times a week. We were really a close family back then.

Now, look at us. Mom and Gary in Parma, me in Toledo, Sammie with her significant other in South Carolina, Michael nearby in a boys’ home, Memaw dead and gone, and none of us really keeping in touch very much—except when Mom and I talk every now and then, and visit on holidays and special occasions. There’s something kind of sad about that.

But I’ve strayed from my point, which was how much my little cousin Michael has grown. My goodness.

Not long ago, I contacted my great-uncle’s case worker in Florida to see how he was doing in the nursing home there. I’m not technically his next-of-kin (my Memaw was his sister), but I’ve been told by my family that I’m his sole inheritor (if he had anything left to inherit). So, I feel obligated to check on him every now and again, to make sure he’s still hanging in there. He doesn’t write much, and he could never hear well, and he was never really all that mentally cohesive, for that matter. But his case manager, Patrick, said he’s doing OK. I told him that, if he ever felt the time was right and that Uncle Charlie could take the news, to go ahead and let him know that his sister died. Last year.

Anyway, there’s one other relative to inform yet: my Uncle Donnie. Yep, that’s him on the left there. He’s my mother’s older brother—and he’s only 50, though he looks pretty bad these days. Uncle Donnie is a carney: a basically homeless vagrant who works for the carnivals as they come around. Ever since I was a very small child, I’ve known that Uncle Donnie is a carney and sleeps under overpasses and hitchhikes to get where he wants to go. It seemed perfectly OK to me then, and only in ensuing years have I come to realize that no one else even knows a carney. This is not a normal career move.

Anyway, after thinking and thinking, I finally Googled the Hillsborough County Sheriff’s Department in Hillsborough County, Florida. That’s where Donnie prefers to spend his time, for the most part, having grown up there. And, whaddaya know, I found him in the online arrests database. That’s where the mugshot came from. And, surprisingly enough, the most recent arrest report (from February of this year) gave a P.O. Box in Ruskin where he could be reached. I’ll be damned. We can contact my homeless vagrant uncle!

I e-mailed the link to Mom and told her that it’s her responsibility to tell her brother that their mother’s dead. I’m not taking that on, too. I found him—the rest is up to her.

So, I was just burning a CD of genealogy info from my Mac to use on my PC, and opened some genealogy photos to test the burn. In the midst of my browsing and testing, I came across this image of my great-great-grandmother—my maternal grandfather’s maternal grandmother. (Did that make sense to you?) 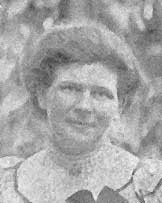 OMG. Does anyone else think that, given a circa 1908 Katherine Janeway-style hairdo, I look like her? Can you see the resemblance? I can. It’s kind of weird. I looked at the whole picture, with her husband Harvey and child Lucille, and thought that Harvey looks a little like Grandpa Cook (or the other way around). Then it occured to me that Nora looks like Mom… and me! I mean, I know we’re related and all… duh… but it’s still kind of strange to look like someone who died almost a lifetime before I was born.

Beth, your family’s into genealogy—any input on genealogical photographic weirdness?