I think it’s the difference between a high-school crush and a lifetime soulmate. They’re both desirable. They’re both positive experiences. And, until you experience the latter, the former seems to be the most amazing experience possible.

In High School band, we had a tradition. As we stood at attention, ready to dismiss, our band director would call out the various facets of our posture that we should remember. He would call, “feet!” We would answer, together! “Back!” Straight! “Shoulders!” Up! Back! Down! And the final call was, “Eyes!” Louder than any reply, we would shout, With Pride! It meant the beginning of an era, of a legend: our band hadn’t been worth anything two years before, and now we were winning competitions and making State Finals. We had pride in what we had become, and what future generations of Buckeye Bands would accomplish by building on our meager 30-member foundation.

I recall that being the most powerful experience in “oneness” with an ensemble… up until that point. In the Northern Aurora Drum and Bugle Corps, we had another tradition, one that transcended “Eyes With Pride” for me. At every corps dismissal, be it at camps, circled up after a show, or following rehearsal, the drum major or corps manager would call us up: “Corps — Ten-Hut!” We would snap to attention, horns snapping to shoulder-level, flags snapping straight, drumsticks snapping into position. The drum major would then call into the silence: “Corps! Dismissed!” and we would answer, “One!”

During every winter camp at NA, when potential new members would be attending, the corps manager would explain that this word referred not to a placement or a ranking, but a feeling of unity with our corpsmates. I refused to join in the response until the camp when I was officially signed as a member of Northern Aurora. At the dismissal of that camp, I answered the call as one member of a team, of a family. It was just as powerful then as it was through the two years I marched in NA, all the way through until our last dismissal at Division III Finals in Orlando, Florida in 1996.

My point? I don’t know. I cherish my time spent both in marching band and in drumcorps. But what still brings me passion, what stirs the fire, what makes me long to relive each and every moment, is drumcorps.

This evening, on WeddingChannel.com, I discovered something that disturbed me as I had not been disturbed since discovering the Tony Hawk Pro Skater Create-A-Skater mode.

The link said, “try on gowns on a model that looks like you!” I shrugged and clicked like the trained internet monkey that I am. After a few minutes of clicking and thinking, thinking and clicking, then a little gasping and rethinking and clicking again, I created VirtuaDiana. Fortunately or not, the gown sizes available required me to downsize VirtuaDiana from current actual size to projected wedding-day size. This will require a weight loss of 1.4 lbs per week from this week until the wedding day. It could happen.

(As a side note… I’ve noticed that VirtuaDiana’s breasteses are severely lacking. Her only choices, unfortunately, were small-med and med-large. The Create-A-Model designers failed to take into account those of us with a large build who count on our enormous hooters to balance us out.)

In related news, today I played Dance Dance Revolution 3rd Mix for 15 minutes in Diet Mode, and also discovered that pomegranate seeds a.) are a good snack, and b.) are a good carpet dye. 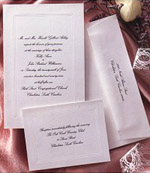 Finally, I’ve put money toward something. I bought Do-It-Yourself invitations online today. Seventy-five invitations with envelopes and 100 reply cards with envelopes cost me a little more than I’d wanted to pay for DIY invites, but $70 is still a decent price for some quality stuff. Fire up ye olde laser printer, and I’ll be set.

I’m not a smoker. But I’d imagine that, as the average twenty-year-old smoker drags on his or her brand of choice, he’s not thinking of the good time he could be having in about 50 years: laying in a hospital bed, losing his hair, being inundated with various chemicals and drugs to sear away the cancer that usurps his lungs.

My grandmother is 70 years old, and she has lung cancer.

When I first heard, almost a month ago (?!), Aaron and I had just chosen a final wedding date. For a fleeting moment, I considered moving my wedding date up a few months, but thought better of it. After all, wouldn’t that be a vote of inconfidence in her ability to pull through? So I called her up in the hospital and told her that at least her hair will have grown back by May.

I seem to be the least worried of everyone, except my Memaw. I wonder sometimes if I shouldn’t be more concerned, considering her age and all. Mom says Memaw has good days and bad days. Tuesday was a bad day, and she was asleep when Mom came to visit. Thursday, however, was a good day, since Memaw was downstairs playing bingo when Mom called to check on her. 🙂

I refuse to be angry at Memaw, though. Sure, this cancer could be pinned down to her decades of smoking — but what will it help to blame the victim? I’d rather just go to the women’s cancer specialty shop and buy her a head scarf or three for her birthday.

You know how, before the first day of school, you would have those "I was at school and didn’t know what my classes were and it was the day of a test and I forgot my pants" dreams? This weekend, I had my first pre-wedding dream. Seven months till D-Day, and already I’m having them.

The wedding was out in the country, at someone’s house. We had to drive out there, and I think I had to go quickly from somewhere. Work or something. At any rate, I had to let my bridesmaids pack my bag and all my stuff, including dress, shoes, hair thingies, change of clothes, etc. Amy (my maid of honor) must have been meeting us later or something, because Mel (bridesmaid #2) was driving me out to the wedding site. We had a tender moment in the car, regarding how much I trusted the judgement of my closest friends, and that’s why I chose them all to join my in my special day.

When we got there, I had to go in the bathroom and change into my wedding garb. Instead of having one of my ladies come in with me, I had my mom help me out. I laid out all my stuff on the floor outside the bathroom door and came to some realizations: 1.) My dress was not pressed; 2.) All I had for hose were the knee-hi’s I wear to work; 3.) I had never gotten my dress altered.

I’ll stop the dream account there, because I distinctly remember some evil magical thing happening in the house, me having to carry my dress elsewhere, and two guests being turned into puppy dogs.