Walking downtown just now I saw two younger ladies wearing calf-length dresses and backpacks. I waited until I could see their signature black name tags before I greeted them with, “Good morning, Sisters!” #exmormon 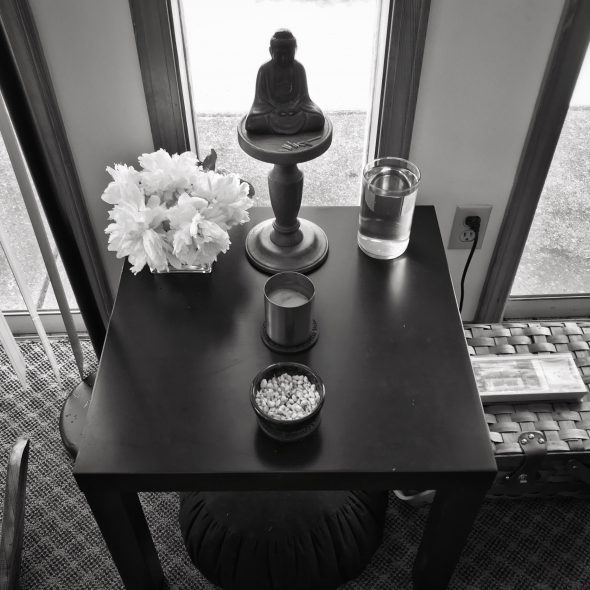 Whether you subscribe to Earth-Air-Fire-Water or Wood-Fire-Earth-Metal-Water, my Zen altar has it covered.

Granted, it doesn’t get as much actual zazen (sitting meditation) love as it should, and it serves more as sunroom decor than a functioning altar lately, but either way, it makes me happy.

I wondered where he learned the word, and where this was going, but I answered him as best I could.

“Religion is what a person believes about how the world was made and where we come from. Some people believe that a god created the earth, and some people believe it was science.” (“Science” is the umbrella term I tend to use with him for natural law, physics, astronomy, electricity, etc.)

“We believe that there is One God,” he said in that tone of voice I knew well — the same tone of voice I used to use when I would say, “We believe in God the Eternal Father, and in His Son Jesus Christ, and in the Holy Ghost.” I suspected that he’d actually absorbed some of the religious sidebars at his old preschool, after all.

“Actually,” I interjected, “Your Dad and I believe that the world was made from science. Who believes that there is One God?” I was trying to figure out where he got this phrase.

He paused. “All my friends,” he answered.  END_OF_DOCUMENT_TOKEN_TO_BE_REPLACED

I’ve been having an increasing number of dreams involving my family’s safety.

In one dream, my son and I were being hunted and herded to small boats on a river. I lost my right shoe in the confusion, and I worried that my son would try to go back for it. Instead, I convinced him to continue basically hiding in plain sight with me, often playing possum, in hopes of avoiding being sent down the river in open boats in the freezing rain.

In another dream, I decided to do a frivolous Facebook Live video from my home, and within hours someone had identified where I lived from the scenery out the window, broken and entered, and made his way up to my bedroom merely to prove he could and to engage me in conversation. My mother walked in, saw him, screamed, and sprayed him with air freshener.

Up until recently, I felt plenty comfortable blogging and posting photos and whatnot. Over time, I stopped identifying others by full name on my blog, to respect their own privacy, but I was fine with sharing my own thoughts and activities — within reason, of course. My civil liberties were intact, though, and I don’t do anything controversial enough to get me doxxed or worse. With the incoming administration, though, I smell McCarthyism — or something very much akin to it — brewing on the horizon. I’m not a Muslim, or an immigrant of any sort, but I am an atheist. Is that a red flag in Trump’s America?

I’m probably deluding myself if I think I would garner any sort of attention for just being a middle-class atheist in the Midwest… but I suppose stranger things have happened.

Either way, I’ve been active online for so long that I’m searchable for years back. Even if I archived and deleted my blog, my Instagram, my Flickr, if I closed my Twitter and LinkedIn and Facebook accounts, if I cancelled my Gmail and got rid of my Google account entirely (and in today’s ultra-connected society, I’m not even sure all those things are feasible), I’m still out there, online, archived, searchable.

As an American citizen, living in the Land of the Free, even my subconscious shouldn’t be having to worry about such things. 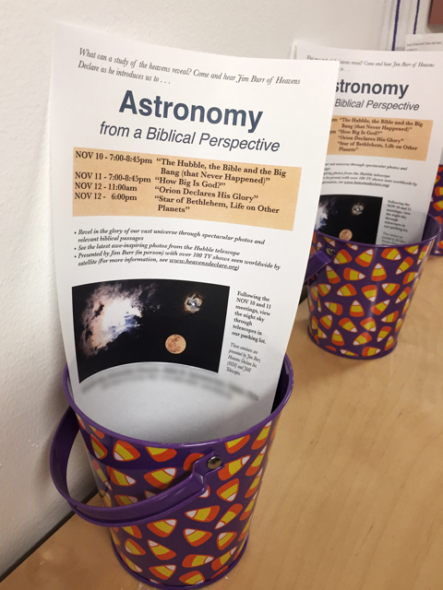 My son’s cubby was conspicuously missing one of these flyers, since the Assistant Director knows that my husband and I are atheists.