Rocking it old-school today with a general life data dump on the blog. It’s been a while.

Last night, the owner of the karate studio pulled Connor and me into his office and told us that he thinks Connor is ready for Black Belt Club — that is, he seems to be serious about karate and wants to continue to pursue higher belts and ranks.

Honestly, the main reason Connor wanted to join BBC was to get to play with a sword. 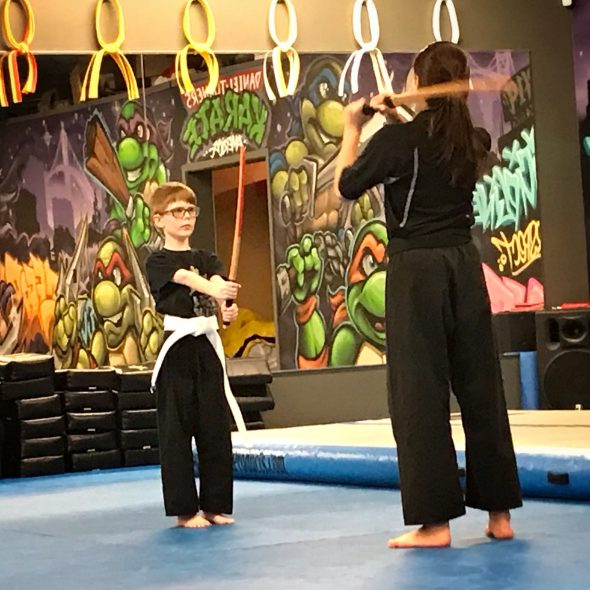 His first go at sword was last night, and he did great. Pretty soon, though, they’ll be learning a different weapon, so we won’t be buying him his own wooden sword anytime soon — he’ll just borrow a sword until the whole group gets their new weapons.

Black Belt Club is really an ingenious way to get families into a longer-term commitment — instead of signing up for a six-month commitment, it becomes a two-year commitment. It’s hard to imagine Connor in third grade, honestly; I hope we haven’t overcommitted.

When I think about it, though, I took ballet classes from age four to age eight, and it was really just a part of my life. I loved it and looked forward to it, and I know my family had to stretch their funds to be able to afford it. Ballet had lasting benefits for me, though, just as I hope karate will for Connor.

i’ve been staring at my first attempt at a t-shirt for a week or so. It’s been hanging on a hanger in my bedroom, where I can look at it and learn from the mistakes I made while sewing: attaching the neckband to an armhole, sewing the other armband on inside-out, stitching the actual neckband all funny and uneven.

Last night, I decided I would wear it to work today. 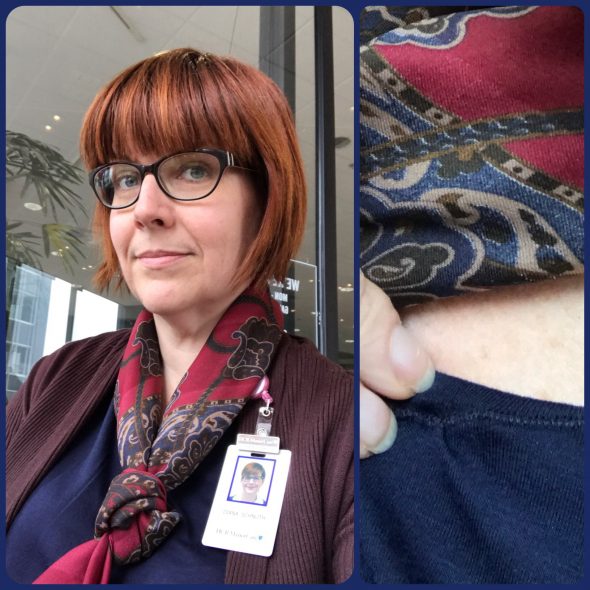 Honestly, you really can’t tell unless I point it out that the neckline (artfully hidden under my scarf) is way wavy, or that the hem is also exceptionally wavy. It’s not just a gardening shirt, after all — it’s totally wearable.

My next go-around with a knit tee will probably involve spray starch for the hems (and maybe the seams), and a longer and wider zig-zag stitch. I’ve got plans. I’m learning. I’m damn proud of myself.

When there were no supermarket flowers awaiting me on the kitchen table this morning alongside Connor’s chocolates, I kind of hoped that I’d be getting a delivery at work today.

As usual, I was not disappointed: 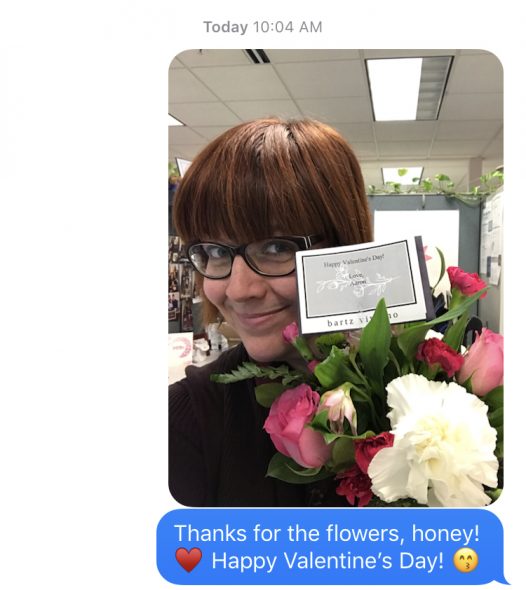 Can’t help lovin’ that man of mine.

To be frank, I’ve been in kind of a funk lately. I haven’t wanted to do any sewing this week, and I’ve been spending my evenings snacking and watching YouTube (my current obsession is The Origin of Everything by PBS).

Seeing the last couple of days laid out in front of me is starting to help me shake it off. I’m pretty stoked to try sewing up my next knit t-shirt, I’m excited for Connor to extend himself and push himself in karate class (no excuses!), and I feel mighty loved, despite also still feeling like I’m disappointing others left and right.

That’s the normal state of my brain, though; I’m used to it. 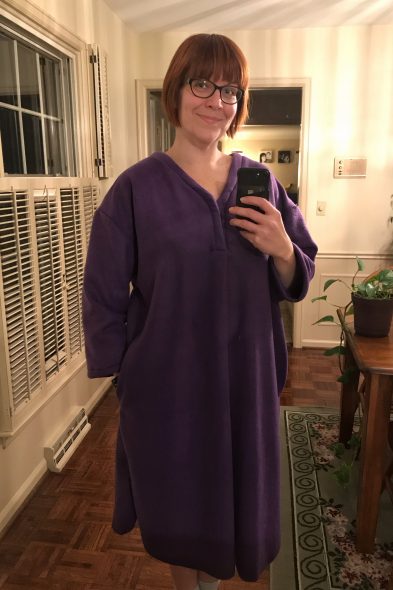 One of my first goals for 2019 was to make a garment from a commercial pattern. For some reason, I was developing a mental block against actually digging into the stash of easy patterns I’ve purchased from Goodwill and garage sales. I’ve made clothes for my son from PDF patterns online, and I’ve drafted my own patterns (with guidance from Melly), but I hadn’t yet taken my scissors to the antique tissue paper that is ’80’s-era sewing patterns.

As I suspected, I really had nothing to fear.

END_OF_DOCUMENT_TOKEN_TO_BE_REPLACED 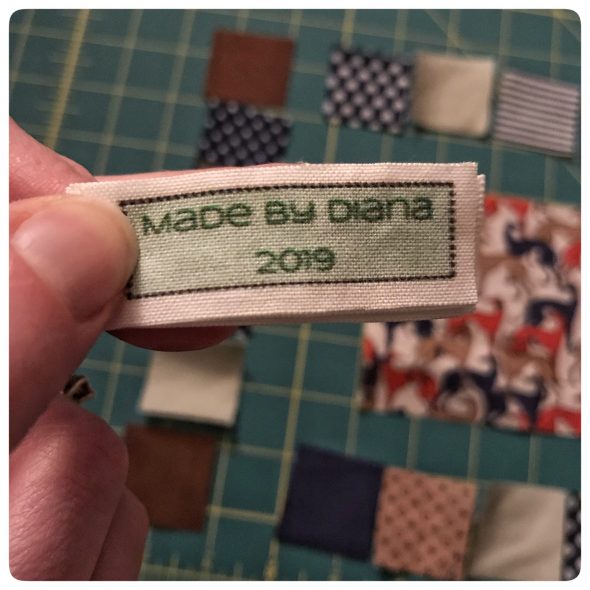 After a bare minimum of designing (read: uploading a screenshot of a couple of formatted cells in Google Sheets) and a $5 payment to Spoonflower, I now have some 50 custom labels to sew into my handmade garments this year.

I thought at first that I was biting off more than I could chew, but I really, REALLY wanted to sew most of my giftables this past Christmas.

I felt like I was figuring out zipper pouches pretty well, and who couldn’t use a pouch to keep stuff in? Pillowcases are a thing, too, and I’ve been getting better at appliqué, so there were lots of possibilities.

I made my husband a C64 zipper pouch for his birthday in November, and it turned out pretty awesome. 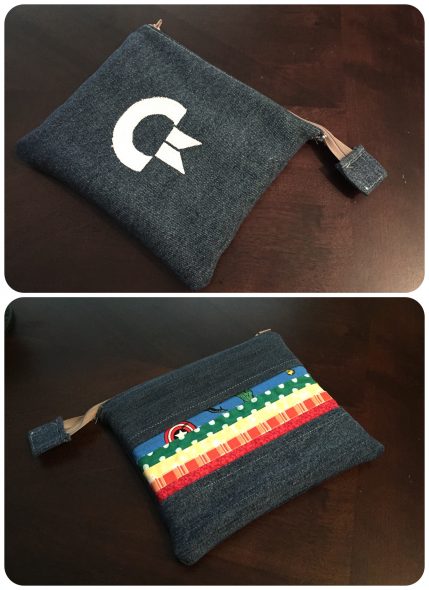 So I went for it. And it went well.

END_OF_DOCUMENT_TOKEN_TO_BE_REPLACED

Sewing has been my jam lately.

I’ve been trying to improve my skills and get more consistent at just a few things before moving on to something new. As evidenced from the above photo, number one on the list has been jammie pants.

END_OF_DOCUMENT_TOKEN_TO_BE_REPLACED 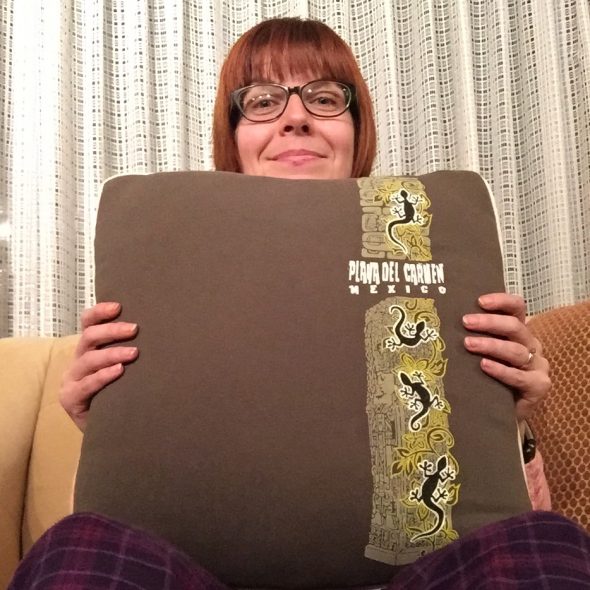 I’ve been trying to expand my sewing skills slowly but surely, one project at a time. The project I’ve been chipping away at for the past few weeks is this throw pillow, made from a t-shirt I bought on vacation back in 2010.

END_OF_DOCUMENT_TOKEN_TO_BE_REPLACED 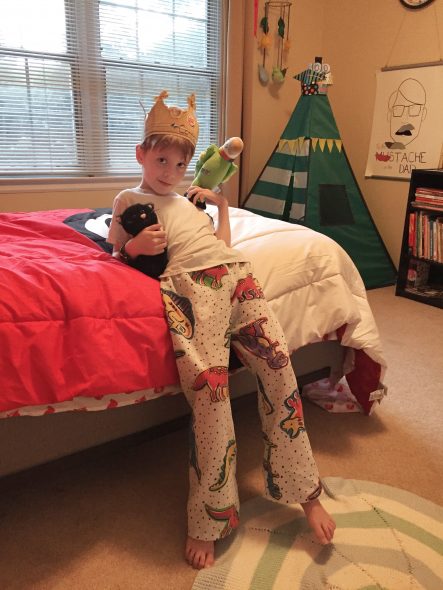 According to his pediatrician’s office, my son Connor has grown two inches in the past year. It’s no wonder, then, that all of last year’s pajama pants are highwaters now.

What a good excuse for me to try some beginner-level pajama pants patterns!

END_OF_DOCUMENT_TOKEN_TO_BE_REPLACED

This was only the second garment I’ve ever sewn (with the first being my Kujiun cosplay skirt from back in ’05… Oh, and also not counting t-shirt surgery attempts). Even though it was very much a learning experience, I’ve gotta say that I’m damn proud of myself for having made something wearable that my son and I both love. 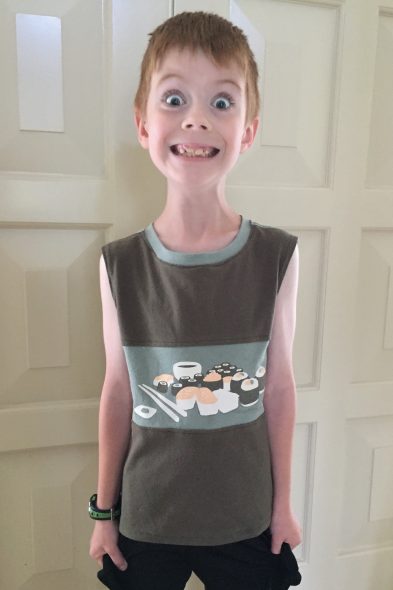 This project was my first attempt at sewing knits, and my first time using my walking (aka even feed) foot. After website after sewing website assured me that knits were nothing to be afraid of, I figured that I’d tackle them early on in my sewing journey, so I wouldn’t have a chance to hype it up and get all weird about it.

I learned so much this time. Yes, that means I made lots of little mistakes, but I’m not consciously trying to spin it in a positive light. I’m genuinely glad that I learned these things by doing.

END_OF_DOCUMENT_TOKEN_TO_BE_REPLACED 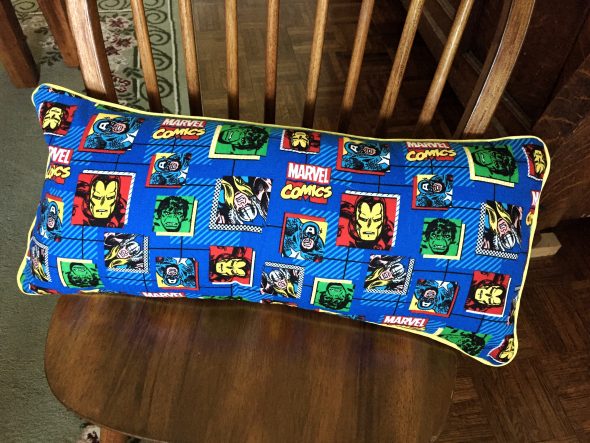 My second (non-plushie) post-pincushion sewing project was this envelope pillow with piping. I made a lot fewer mistakes on this one, and the finished product looks pretty classy — classy enough that I’m OK with the fact that my son is only kind of meh about the pillow, so it lives on the couch instead of in his bedroom.  END_OF_DOCUMENT_TOKEN_TO_BE_REPLACED

Last year, before I really got interested in sewing, my son asked me to make him a mega-mushroom stuffie. I explained to him that I really wasn’t that skilled yet, and that I didn’t have that much fabric to work with — all I really had was some leftovers from my first (and only) cosplay, plus some attempts at cute fleece anime hats and other randomness.

Instead of a giant mega-mushroom, I convinced him to let me hand-sew him a little blue mushroom — the kind that makes Mario into a little flea in New Super Mario Bros.

Connor loved his new fleece-and-felt mushroom, and named him Blue-White. 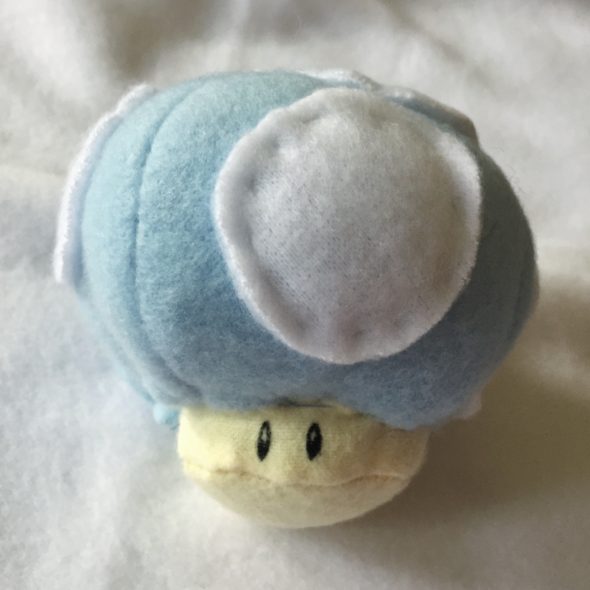 That was a year and a half ago. Now that I’ve gotten back into sewing, Connor asked me if I could finally make him that mega-mushroom he asked for so long ago. Luckily, he was OK with Mega being only a little bigger than Blue-White, so I was able to use some more fabric scraps — this time, the back half of an old yellow t-shirt and some red remnants I bought off of eBay, along with an old peach-colored woven fabric scrap — instead of taking my son on a Joann’s trip.

Of course, everything for a six-year-old has to be done NOW, so this project got done in a morning and part of an afternoon. 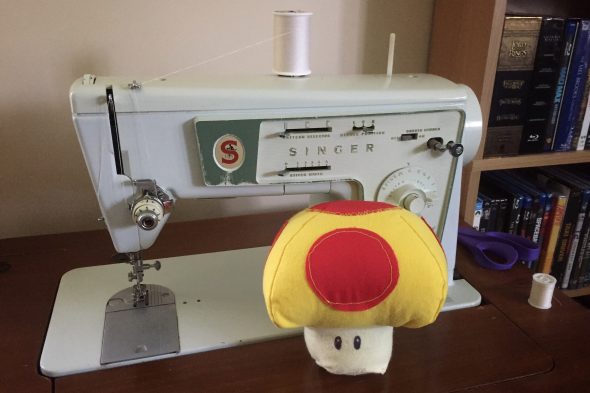